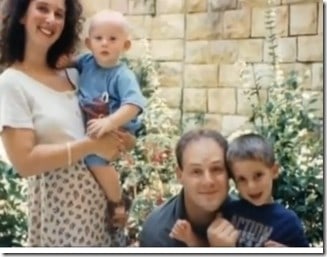 That is a beautiful picture from Anne Lewin, her husband Daniel Lewin and their two boys. Anne was married to Daniel whom was very likely the first person to die on September 11th attacks. We remember today all the victims to honor their memories.

According to CNN reports from that tragic day 12 years ago

Lewin was sitting in seat 9B. With his Israeli military training and understanding of Arabic, he may have figured out what was going on, perhaps even tried to stop it. According to flight attendants’ calls relayed to authorities on the ground, the first passenger to be killed was seated in 9B. He was stabbed to death.

He later moved to Cambridge, Massachusetts to continue his PHD studies where along with Professor F. Thomson Leighton, co-founded Akamai Technologies, Inc. which is one of the world’s largest distributed-computing platforms.

The former captain turned entrepreneur met his wife Anne in Israel after she immigrated from Belgium. The couple was based in Massachusetts and have two sons Eitan and Itamar Lewin who were aged five and eight during the September 2001 attacks where their father who was 31-years-old lost his life.

Anne’s husband could have been killed by Satam al-Suqam according to A 2002 FAA memo. The highly successful technology executive received many awards and after his death many have honored his memory and legacy; he is the subject of the 2013 biography No Better Time: The Brief, Remarkable Life of Danny Lewin, the Genius Who Transformed the Internet by Molly Knight Raskin as well as the “Danny Lewin Square” that used to be the intersection of Main and Vassar Streets in Cambridge, Massachusetts but was named after him.

His wife Anne and two boys now age 17 and 20 still live in Massachusettes.

A true genius that will never be forgotten.