Jenni Haukio is the current wife of Finnish politician Sauli Niinistö -who currently serves as President of the Republic of Finland.

Jenni’s husband serves as the 12th President of the Republic of Finland. He was elected on March 2012 and was re-elected for another six-year term in January 2018.
He was born in Salo on 24 August 1948. Sauli Niinistö graduated from the University of Turku with a Bachelor of Laws degree in 1974 and was subsequently employed as a rural police chief. He then serves for over a decade as an assistant judge at the Turku Court of Appeal. He also gained experience of corporate administration as an attorney.
He began his political career in 1977 when he was elected to the Town Council of Salo. He continued to hold elected posts in local government until the 1990s.
The politician has been married a couple of times, meet current wife below. 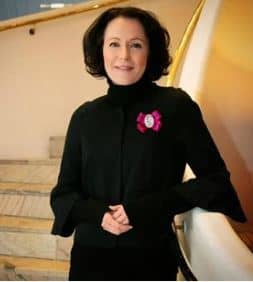 #1 Jenni Haukio is his second wife

Sauli was first married to Marja-Leena Niinistö -the two became husband and wife in 1974. He was left a widower following Marja-Leena’s death in 1995 who was killed in a car crash. From his first marriage, the couple welcomed two sons Nuutti and Matias.

#2 She holds a Master and is a PhD candidate

#3 Jenni Haukio is a poet

Jenni Haukio has published three collections of poetry, and her poems have also been anthologised. In 1999, her debut collection Paitasi on pujahtanut ylleni (Your shirt has slipped over me) won the national Runo-Kaarina competition. Her latest collection, Sinä kuulet sen soiton, was published by Savukeidas Kustannus in 2009.
In 2017, to honour Finland’s 100 years as an independent nation, Haukio edited the poetry anthology Katso pohjoista taivasta – Runoja Suomesta. This anthology is currently ranked number 1 on the list of best-selling books in Finland (2017).

#4 She met her husband working at the National Coalition Party

#5 She and Sauli kept their relationship secret

The two met originally in 2005 after she interviewed him for the Nykypäivä magazine. They later became a couple, but they kept their relationship a secret from the public until their marriage on January 2009.

Jenni gave birth to a son Aaro Veli Väinämö Niinistö in February 2018. Their family also includes Lennu, a Boston Terrier in addition to her husband’s two adult sons from his first marriage.

#7 She also works as a columnist

The political spouse and mother of one also works as a columnist at Seura and Kotiliesi magazines.

#8 She is active as a first lady

As the spouse of the President of the Republic, Haukio works actively in patronising several major organisations such as UNICEF Finland, Save the Children Finland and the Mannerheim League for Child Protection. Since the beginning of 2019, Jenni Haukio has acted as the Chair of the Supervisory Board of the New Children’s Hospital Foundation.